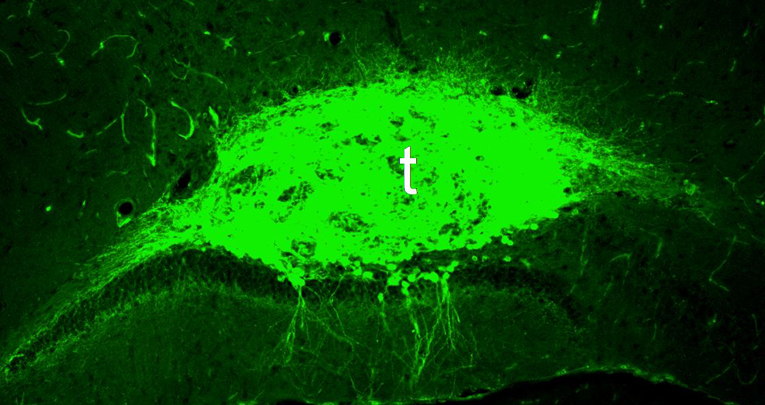 Alzheimer's disease (AD) is the most common form of dementia, characterized by the presence of two principal hallmarks—amyloid plaques and neurofibrillary tangles.
The primary cause of the majority of AD cases is not known. Likewise, the mechanisms underlying the propagation of the pathology from affected tissue to neighboring healthy neurons are largely unknown, but knowledge about them could be helpful to design strategies aimed at halting the progression of the disease.

To throw light on the mechanisms of propagation of neuronal damage to healthy tissue, wild-type (WT) hippocampal solid tissue chunks derived from green fluorescent protein (GFP)-positive embryos were grafted into the hippocampus of 6-month-old WT and 3xTg-AD mice, a triple-transgenic mouse model that exhibits both amyloid-beta (Aß) and tau protein pathology.
The histological and morphological alterations of the grafted tissues were assessed 3 months post-transplantation. Tissues grafted in 3xTg-AD hosts, compared to those grafted in WT recipients, presented a significant decrease in neurite outgrowth (35.4%) and dendritic spine density (41.3%), mainly due to a reduction of stubby and thin-shaped spines.

Moreover, some cells of the tissue transplanted in 3xTg-AD hosts accumulated intracellular amyloid peptide deposits similar to the cells of the host. Furthermore, the immunohistochemical examination of reactive astrocytes and microglia revealed the presence of more inflammation in the grafted tissues hosted in 3xTg-AD compared to WT recipients.

These results show a propagation of neuronal damage to initially healthy embryonic grafts, validating this methodology for future studies on the mechanisms of the progression of AD pathology to surrounding regions.
[ read more ]