Non-newly generated, "immature" neurons in the sheep brain are not restricted to cerebral cortex. 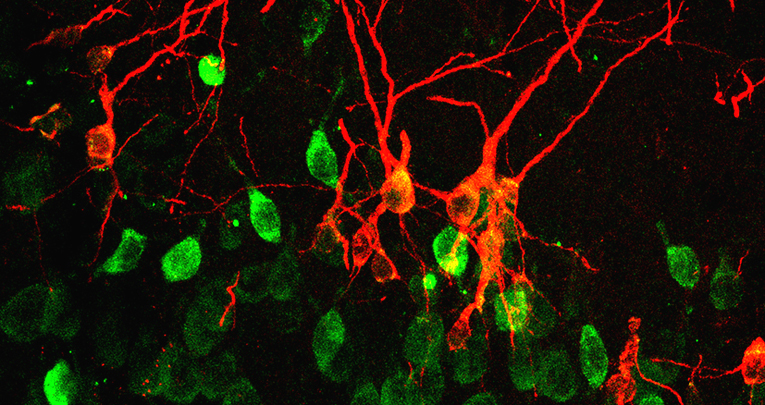 Non-newly generated, "immature" neurons in the sheep brain are not restricted to cerebral cortex.

A newly proposed form of brain structural plasticity consists of non-newly generated, “immature” neurons of the adult cerebral cortex. Similar to newly generated neurons, these cells express the cytoskeletal protein Doublecortin (DCX), yet they are generated prenatally, then remaining in a state of immaturity for long periods. In rodents, the immature neurons are restricted to the paleocortex, whereas in other mammals are found also in neocortex. Here, we analyzed the DCX-expressing cells in the whole sheep brain of both sexes, to search for an indicator of structural plasticity at a cellular level in a relatively large-brained, long-living mammal.

Brains from adult and newborn sheep (injected with BrdU and analyzed at different survival times) were processed for DCX, cell proliferation markers (Ki-67, BrdU), pallial/subpallial developmental origin (Tbr1, Sp8), and neuronal/glial antigens for phenotype characterization. We found immature-like neurons in the whole sheep cortex and in large populations of DCX-expressing cells within the external capsule and the surrounding grey matter (claustrum and amygdala). BrdU and Ki-67 detection at neonatal and adult ages showed that all these DCX+ cells were generated during embryogenesis, not after birth. These results show that the adult sheep, unlike rodents, is largely endowed with non-newly generated neurons retaining immature features, suggesting that such kind of plasticity might be particularly important in large brained, long living mammals.

SIGNIFICANCE STATEMENT
Brain plasticity is important in adaptation and brain repair. Structural changes span from synaptic plasticity to adult neurogenesis, the latter being highly reduced in large-brained, long-living mammals (e.g., humans). The cerebral cortex contains "immature" neurons, which are generated prenatally then remaining in an undifferentiated state for long periods, being detectable with markers of immaturity. We studied the distribution and developmental origin of these cells in the whole brain of sheep, namely, relatively large-brained, long-living mammals. In addition to the expected cortical location, we also found populations of non-newly generated neurons in several subcortical regions (external capsule, claustrum, amygdala). These results suggests that non-neurogenic, parenchymal structural plasticity might be more important in large mammals with respect to adult neurogenesis.