The role of autophagy and its relationship with apoptosis in Alzheimer disease (AD) pathogenesis is poorly understood. Disruption of autophagy leads to buildup of incompletely digested substrates, amyloid-β (Aβ) peptide accumulation in vacuoles and cell death. Aβ, in turn, has been found to affect autophagy. Thus, Aβ might be part of a loop in which it is both the substrate of altered autophagy and its cause. Given the relevance of different soluble forms of Aβ1-42 in AD, we have investigated whether monomers and oligomers of the peptide have a differential role in causing altered autophagy and cell death.

Using differentiated SK-N-BE neuroblastoma cells, we found that monomers hamper the formation of the autophagic BCL 2-BECN 1/beclin 1 complex and activate the MAPK8/JNK1-MAPK9/JNK2 pathway phosphorylating BCL 2. Monomers also inhibit apoptosis and allow autophagy with intracellular accumulation of autophagosomes and elevation of levels of BECN 1 and LC 3-II , resulting in an inhibition of substrate degradation due to an inhibitory action on lysosomal activity. Oligomers, in turn, favor the formation of the BCL 2-BECN 1 complex favoring apoptosis. In addition, they cause a less profound increase in BECN 1 and LC 3-II levels than monomers without affecting the autophagic flux. Thus, data presented in this work show a link for autophagy and apoptosis with monomers and oligomers, respectively. These studies are likely to help the design of novel disease modifying therapies. [ read more ] 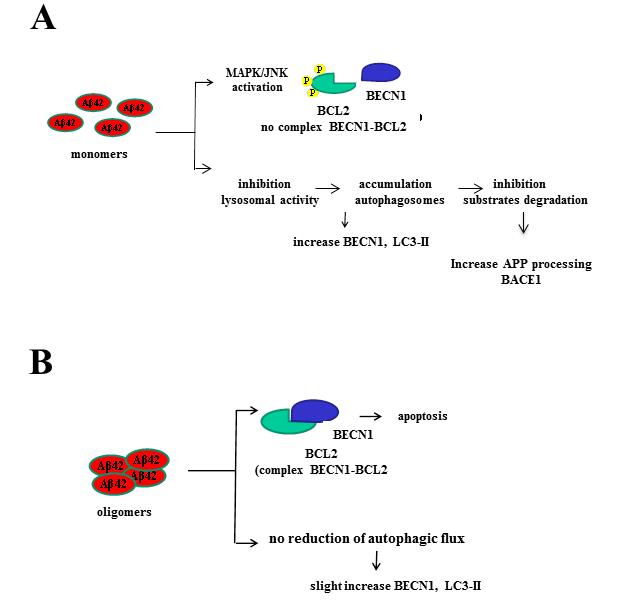 Proposed effects onto autophagy and apoptosis elicited by Aß1-42 monomers and oligomers.

(A) Monomers impede formation of the BCL2-BECN1 complex by activation of the MAPK/JNK pathway that phosphorylates BCL2. Monomers also cause early endosome accumulation due to an inhibitory action on lysosomal activity, resulting in intracellular accumulation of autophagosomes with elevation of levels of BECN1 and LC3-II, and inhibition of substrate degradation.

(B) Oligomers favor the formation of the BCL2-BECN1 complex leading to apoptosis. They also cause a less profound increase in BECN1 and LC3-II levels and do not affect the autophagic flux.